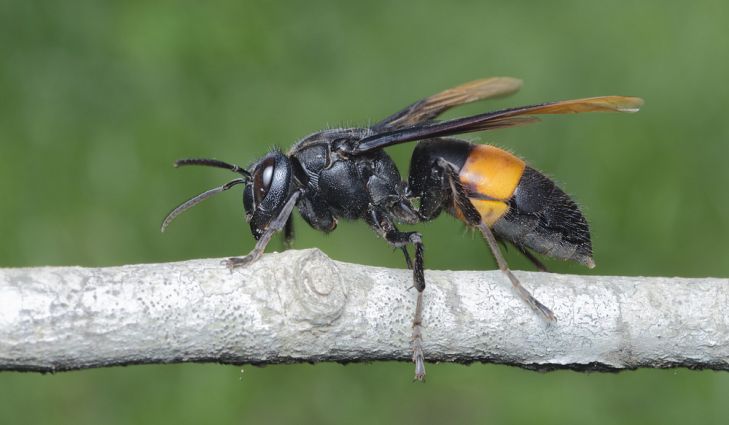 It has been warned that a large amount of Asian hornets could make their way to Scotland this summer.

Record levels of the small but deadly insect have been found on the Channel Islands, and experts are warning that they could head north to Scotland.

They are potentially deadly if stung by them, if the victim is allergic to their venom. But at the very least, their sting will be excrutiatingly painful.

The creatures showed up in large numbers on Jersey, and should they relocate to the south of England, it’s only a matter of time before they spread to Scotland.

13 hornet nests have already been destroyed in Jersey this year, and 80 Asian hornet queens have been spotted according to The Jersey Post.

“A lot of people are on high alert, which means the amount of reports is much higher than last year. So far we have had a total of 203 reported sightings of Asian hornets and of those, just 80 turned out to be a hornet – the rest were just wasps, bees and other pollinating insects.”

“But while the increased amount of sightings is partly down to people being more aware, it is also undoubtedly due to the fact that there are more of them on the island this year.”

The insects are originally from Asia, but they showed up in France in 2004, eventually reaching the Channel Islands and UK in 2016.

“By ensuring we are alerted to possible sightings as early as possible, we can take swift and effective action to stamp out the threat posed by Asian hornets.

“While the Asian hornet poses no greater risk to human health than a bee, we recognise the damage they can cause to honey bee colonies and other beneficial insects.

“Please continue to look out for any Asian hornets and if you think you’ve spotted one, report your sighting through the Asian hornet app or online.”

If you spot a Asian Hornet’s nest be sure to call your local wasp removal experts to ensure they are dealt with before causing any harm.